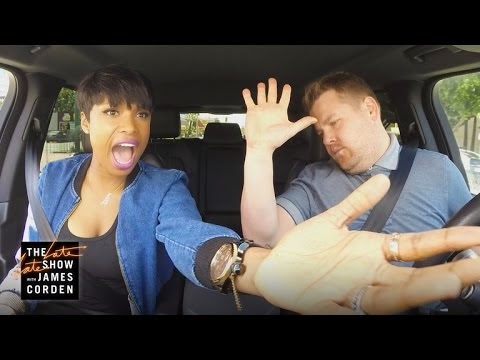 s
Jennifer Hudson joined James Corden Monday for "Carpool Karaoke," a recurring segment on CBS' The Late Late Show. The Academy Award winner was a little late, and after some bickering, they made up and began their drive through L.A. Corden lightened the mood by turning on "Trouble," Hudson's song with Iggy Azalea. "I didn't put it on!" she said. "I didn't put it on the radio!" Corden began to dance while driving, saying, "It's such a good tune! It really is!" He impressed Hudson by rapping Azalea's verse, too!

Before long, Corden wanted to hit up the Astro Burger drive-thru. "I'm not going to change my routine just because I'm running late," he explained. Hudson sang his order, which included a cheeseburger and fries. "Don't forget my Diet Coke," she crooned. The late-night host then did his best R. Kelly impression.

Ironically, Hudson once worked at Burger King. "My favorite part was singing in the driveway," she said. "While they was pulling up, they heard me soon as...AHHHHHHH!" Hudson recalled, hitting a huge note.

Corden then turned on "Spotlight," another one of Hudson's hits.

"I didn't have 'Spotlight' back then, but..." she said before singing along.

When they drove past Hudson's star on the Hollywood Walk of Fame, they pulled over to take a selfie. Once they were on the road again, Hudson used a water bottle as a microphone and serenaded a bus.

Corden also asked Hudson about David Otunga. "Your fiancé is law graduate, Harvard, but he's also a wrestler, which makes no sense to me," he said with a laugh. "There can't be many people in the world who are like, 'I'm going to be a WWE wrestler and I'm going to have my law degree to fall back on.'"

"It's interesting," she said. "Sometimes he likes to experiment on me and put in, like, a headlock." After demonstrating one of Otunga's moves, Corden joked, "We call that domestic abuse in Britain."

Hudson and Corden showed their range when they sang "And I Am Telling You" from Dreamgirls. Hudson didn't miss a single note, whereas Corden...tried his best