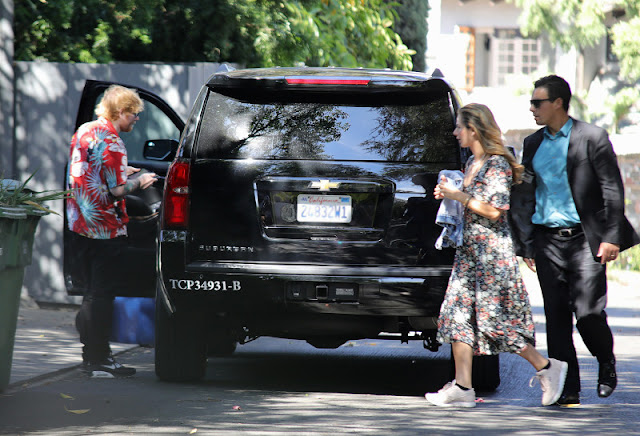 Celebrating among friends? Ed Sheeran and Cherry Seaborn were spotted on a double date with Courteney Cox one day after the pair sparked wedding rumors.
Secret Celebrity Weddings

The trio dined at Giorgio Baldi in Los Angeles on Tuesday, August 28, along with Cox’s fiancé, Johnny McDaid.
Celebrity Weddings of 2018

Sheeran, 27, sported a red Hawaiian print shirt and black pants for the outing, with the silver band noticeably displayed on his ring finger. Meanwhile, Seaborn donned a cute floral dress, sneakers and her sparkling engagement ring. The 26-year-old was not wearing a wedding band.
Quickest Celebrity Engagements Ever

The “Perfect” singer raised eyebrows on Monday, August 27, when he played coy about a band on his left ring finger in an interview with Access. When pressed about how he was able to “sneak that one,” Sheeran responded, “I never really do anything too public anyway.”

Wed or Not Wed?

Sheeran also aroused suspicions when he shrugged off wedding rumors in an Entertainment Tonight interview on Monday, though he did admit, “I don’t like large groups of people at the best of times. I never wanted a wedding that was loads of people.”
Credit: MEGA

Earlier this year, the British crooner explained why he was wearing a ring on his left hand. “I never saw why men didn’t wear engagement rings. It’s the same commitment either way,” he said on Lorraine in February. “Cherry made it for me herself out of clay. I really like it.”
Credit: MEGA