Matt Lauer Presses Marco Rubio: What’s the Difference Between You and Obama? 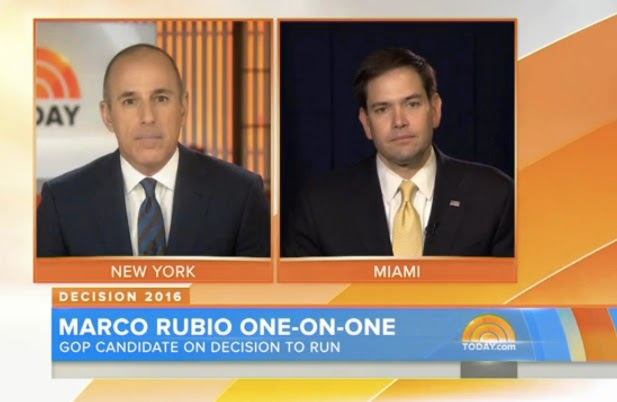 “There’s a difference between Barack Obama and I,” Rubio says
New presidential candidate Marco Rubio spoke with Matt Lauer Tuesday, explaining why he, as a one-term Senator is different than President Obama, who was a one-term Senator who won the presidency.
Rubio claimed there was a stark difference between he and Obama’s political experience, listing his previous roles before serving as a Florida Senator: serving in local government, state government and as the Florida Speaker of the House.
The Cuban American Senator also asked to whether he broke an unwritten rule by running when his mentor, former Governor Jeb Bush.

Also Read: Jon Stewart: Marco Rubio Got Speaking Gig for Being Hispanic (Video)
Conservative media agreed he is the most charismatic, articulate candidate on the Republican side; many liberal pundits and anchors also agreed that Rubio gives a good speech and has a good life story to captivate voters.
Watch below.