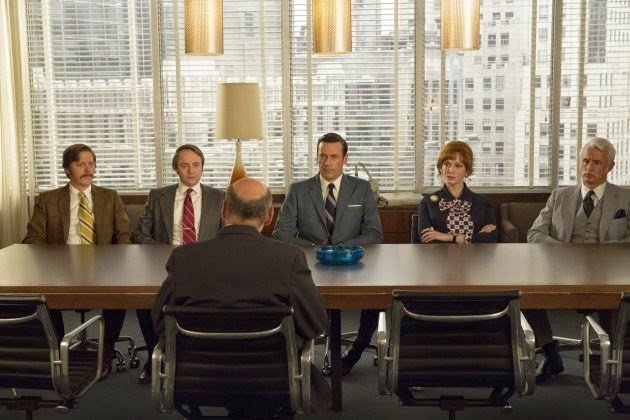 "Mad Men" said its final goodbye, as it wrapped up its seven season run on Sunday night on AMC.

(Spoiler Alert! This story contains details from the final episode of "Mad Men.")

There were no tears of sadness, and thankfully no man in a suit falling out of a window like some predicted based on the opening credits sequence. Instead, the final episode offered some characters peace, while others found opportunities, and the rest found good old happiness.

Here's how things were wrapped up for the "Mad Men" characters:
Don Draper

He left it all behind and in the end, he found some peace. The seemingly never ending road trip Don was on in the last couple of episodes finally stopped in California after Don caught up with Anna's niece, Stephanie (Caity Lotz). He was in bad shape when he arrived at her door. He'd recently learned from Sally that his ex-wife, Betty, was dying of lung cancer, and while on a call to Betty, she told him she definitely didn't want him coming back and disrupting the kids' lives (she wanted them to live with her brother and his wife after her death). Like Don, Stephanie too was in a bad place, her own child living with her ex and his family. But, as she prepared to leave for a retreat, she looked over at Don on the couch and decided he needed to come with her.


Things got hairy for Stephanie during a group session at the retreat when another woman accused her of being a bad parent. It crushed her and during the night, a distraught Stephanie took Don's car and split. Alone, and with no immediate way to get anywhere (ordering transport out of there would take a couple of days, Don was told), Don fell into a depression and turned to the only person he could think of -- Peggy. During their emotional call, she tried to get him to come home – reminding him he could work on the Coke campaign at McCann-Erickson. "I can't," he said, as his head sunk down by the pay phone."[I] messed everything up," Don told her. "I broke all my vows. I scandalized my child, took another man's name and made nothing of it," he said. "I only called because [I] realized I never said goodbye to you," he said, as all of America began to worry that things were about to take a sour turn.

But they didn't. Instead, one of the retreat leaders (played by former "Supergirl" Helen Slater) took Don inside for a group session and he listened as Leonard, a man in a blue sweater, shared a story about going through life unnoticed and feeling sometimes, unloved. And he also shared one about a dream he had where he imagined he was an item in on a refrigerator shelf that went unpicked by his family.

After seeing the man start to bawl at the end of his story, Don was so moved by it all, he stood up, walked over to the other side of the room and hugged the man tightly. It was a life changing moment for Don because the next – and last time – we saw him, he was in a lotus position (in a white shirt and khaki pants), greeting the sun with the retreat group. "New day, new ideas, a new you," the yoga leader said. A bell chimed and everyone, including Don, said "Ommm." As the camera closed in on his face, Don smiled. The final scene of the show was the "I'd Like To Buy The World A Coke" ad from 1971 (coincidentally made by the real McCann-Erickson).