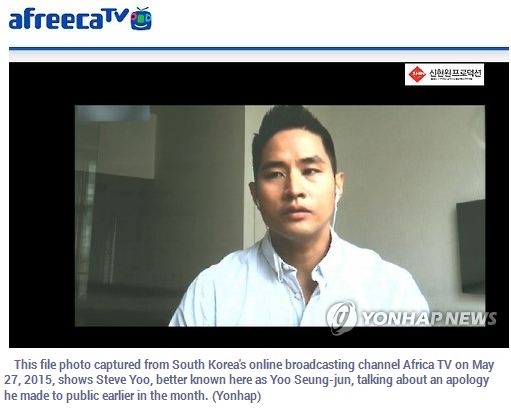 An appellate court upheld a lower court ruling Thursday that banned a Korean-American singer from entering the country because he obtained American citizenship to dodge compulsory military service here.

The Seoul High Court ruled against Yoo Seung-jun, 41, internationally known as Steve Yoo, who filed a suit against the Korean consulate in the United States after it refused to issue him a visa in October 2015.

Yoo requested the visa 13 years after the Ministry of Justice first banned him from entering the country following a barrage of public criticism after he obtained U.S. citizenship and forfeited his Korean citizenship in January 2002, despite his repeated promises to fulfill his military duty here.

"The lower court ruling was apt in denying Yoo entry, following which he would have resumed entertainment activities without any consequences for dodging military service," the court said.

"Such an act not only demoralizes many young soldiers who sacrifice their valuable time, but also could end up encouraging others to attempt to dodge compulsory duty, which hurts the national interest."

The ruling comes five months after the Seoul Administrative Court ruled against him last September.

While Yoo held a tearful broadcast online in 2015, saying he had not intended on lying about serving his military duty from the beginning, the attempt failed to turn the already soured public sentiment to his favor.

Yoo's defense attorney said he is consulting him on whether to file an appeal with the Supreme Court.

All able-bodied Korean men are required to serve in the military for about two years. Attempts to avoid conscription by young entertainers, as well as children from powerful families, are strongly criticized.