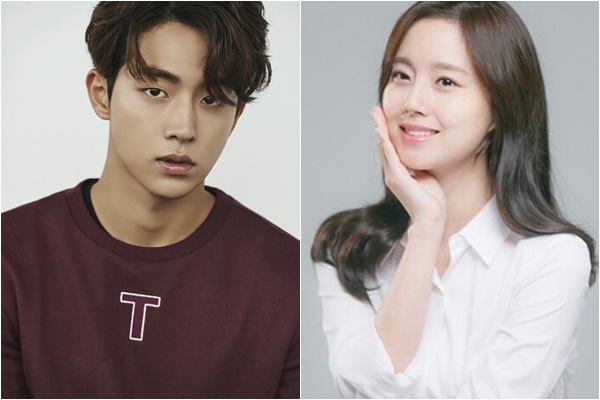 tvN drama, "Bride of the Water God 2017" finally locks down its cast, with the news that Nam Joo-hyuk, Sin Se-kyeong, Krystal and Gong Myeong have signed on.

"Bride of the Water God 2017" is an adaptation of the popular manhwa, "Bride of the Water God", updating the story to the present day. I've read the first five volumes of the manhwa, so I can give you an idea of how the story starts: To end a drought, So-ah is sacrificed as a bride to the Water God, Ha-baek. Instead of drowning, So-ah finds herself in the Water Kingdom, where she has to contend with the various supernatural factions, and her complicated feelings towards her mysterious husband, Ha-baek, who still carries a torch for his dead first wife. Sin Se-kyeong will be taking on the role of So-ah, while Nam Joo-hyuk will be Ha-baek. Rounding out the leads is Krystal as He-ra (Mu-ra in the manhwa), a witch, and Gong Myeong as Bi-ryeom, the God of the Wind.

I'm not sure which parts of the story they'll keep in this update (I'll assume they'll lose the facial tattoos for Krystal's character at the least). Regardless, the drama is in good hands with director, Kim Byeong-soo ("Nine: Time Travelling Nine Times", "Queen In-hyun's Man") and writer Jeong Yoon-jeong ("Incomplete Life", "Arang and the Magistrate"). In fact, I'm more curious to see how the setting will translate to the present day, since most of the story is set in the supernatural world.

"Bride of the Water God 2017" will be entirely pre-produced, but it doesn't yet have an air date. Here's hoping it does better than tvN's last pre-produced drama, "Cinderella and the Four Knights".