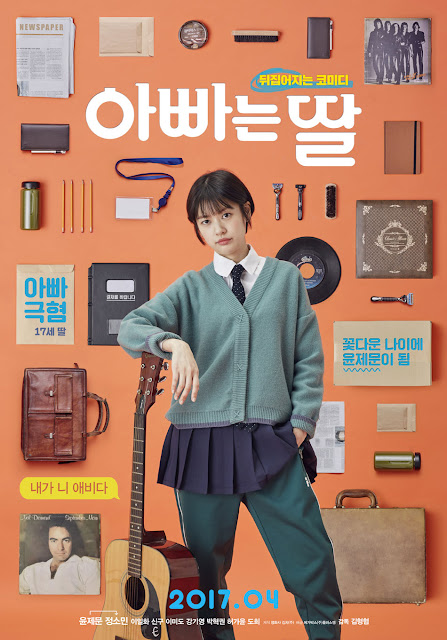 Based on the novel "Papa to Musume no Nanokakan" by Takahisa Igarashi (published October, 2006 by The Asahi Shimbun Company).
Filming began November 1, 2015 and finished February 16, 2016

Do-Yeon (Jung So-Min) is a high school student. She doesn't have a good relationship with her father (Yoon Je-Moon) who is constantly nagging to her to study. Do-Yeon’s dream is to go on a date and her first date is approaching. Meanwhile, Do-Yeon’s father has worked as a chief section for years and never had a promotion. His chance for a promotion is finally approaching. Both father and daughter have important moments arriving, but they suddenly change bodies.

“Dad is Daughter” (literal title) starring Jung So-Min & Yoon Je-Moon. The film is based on 2006 Japanese novel “Papa to Musume no Nanokakan” by Takahisa Igarashi. The novel was previously adapted into 2007 TBS drama series “Seven Days of a Daddy and a Daughter” (“Papa to Musume no Nanokakan”) which stars Yui Aragaki &
Hiroshi Tachi in the lead roles. Story for “Dad is Daughter” follows daughter (Jung So-Min) and father (Yoon Je-Moon) as they both have important moments approaching … but they suddenly switch bodies.