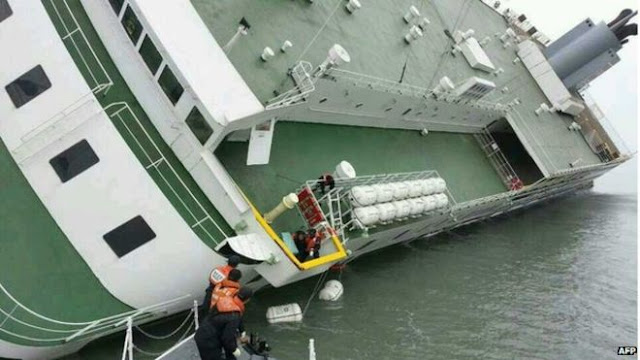 South Korea begun to recover the Sewol ferry from the sea off South Korea, three years after it sank killing 304 people, mostly students 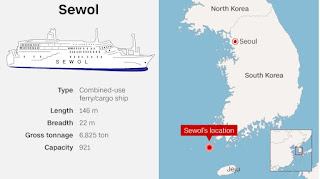 The long delay in recovering the vessel has angered victims' families, many of whom gathered on boats to watch the
operation Wednesday.

Ordered by the interim government, the planned recovery follows the impeachment of former President Park Geun-hye
whose handling of the disaster attracted intense criticism.
Engineers will attempt to lift the 140-meter long ferry from the water without having to cut it into pieces.
Doing so will help recover the nine bodies believed to be still trapped inside..
South Korean workers have begun an operation to salvage a 6,800-ton ferry that sank in 2014, killing more than 300 people
and triggering a public uproar that contributed to the recent ouster of Park Geun-hye as president.

Workers on two barges have slipped 66 cables beneath the Sewol ferry, which has been lying on its left side in about 130 feet of water.
The cables are connected to a frame of metal beams divers have spent months putting in place.

Lee Cheoljo, a ministry official, said workers had lifted the ferry about 3 feet above the seafloor, and divers were inspecting
the ship underwater. He told reporters that a balancing operation is required because of the ferry’s tilt.

The salvage operation is expected to take at least 10 hours to raise the top part of the ferry about 42 feet above the surface.