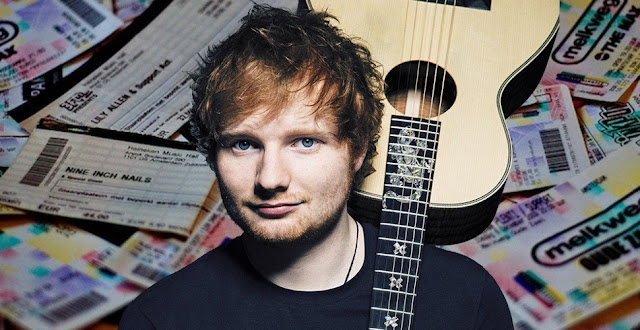 Over the last couple of weeks, Ed Sheeran has been making headlines for his new stance on ticket resellers, which has seen countless tickets to his current UK stadium tour cancelled as a way to ensure that fans don’t pay more than face value for them.

“I hate the idea of people paying more than face value for tickets when you can get them at face value,” explained Sheeran to the BBC’s Newsbeat. “People just need to start taking a stance and within two or three years companies like Viagogo are just going to be kaput.”

The method being undertaken at Ed Sheeran’s recent gigs involves promoters going through and ensuring that tickets sold through secondary services are cancelled. Then, as the fan tries to use these tickets at the door to gain entrance, they are given the chance to attempt to claim their money back from sites such as Viagogo and the ability to buy new tickets at face value. While it’s a win for the consumer on paper, many have criticised this new stance.
SPONSORED LINKS
However, the Ticket Leaks Twitter account has now alleged that Clancy Sheriffs of Sheeran’s UK promoter, Kilimanjaro Live, directly sold 600 tickets to a resale service in 2015, providing invoices to back up their claim.


However, Kilimanjaro Live were quick to ensure people that there was anything untoward happening at the time that the tickets were sold to Ticket Queen’s Maria Chenery-Woods. “There is no story here. Clancy was working under company instructions when he legitimately allocated tickets to Ticket Queen who we had used for several years as a primary seller,” the company wrote on Twitter.

“These tickets were allocated in good faith to be sold at face value in the same way we do for ticket agents at all our shows. In 2016 we learned that Ticket Queen were acting as touts & we have refused to work with them since.”

“They are now under investigation by Trading Standards & in recent weeks we discovered they had bought 180 tickets using a bot so we cancelled them.”

There is no story here. Clancy was working under company instructions when he legitimately allocated tickets to Ticket Queen who we had used for several years as a primary seller. These tickets were allocated in good faith to be sold at face value in the same way we do for...1/2
— Kilimanjaro Live (@KilimanjaroLive) May 27, 2018

Understandably, some Twitter users reacted rather poorly to this response, asking why the company would sell such a large amount of tickets to a single purchaser in such a manner.

However, speaking to Billboard, Ed Sheeran’s manager Stuart Camp confirmed this news, revealing that they were in fact somewhat duped by Chenery-Woods, explaining that, “A few years ago she was presented as a legit seller.”

“Found out later it was a bad practice and ceased and blacklisted [Woods],” before revealing that all of this took place before the release and subsequent tour for Sheeran’s current album, ÷ (Divide).

While no more confirmations of acknowledgements have been made by Ed Sheeran’s camp, Ticket Leaks have continued to share more information about other promoters allegedly selling tickets to resale services in the UK, with tickets for acts such as Robbie Williams and Queen being at the forefront of these accusations.